Step Five is Direct Action. Only as a last resort, should direct action be launched. Too often people charge ahead, without laying the groundwork, and act based on rumors. They fail to negotiate based on specifics learned from investigation. Charlie Walker stressed, “Direct action must be launched only when all attempts at persuasion have failed, repeated offers of negotiation are refused and no area of compromise can be found.” He wrote, “the effort is not to overcome or humiliate the opponents, but rather … to seek reconciliation, understanding and friendship.” 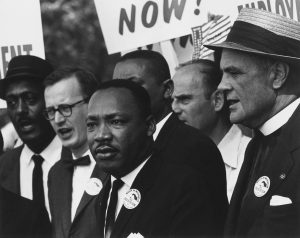 Dr. Martin Luther King at the 1963 March on Washington